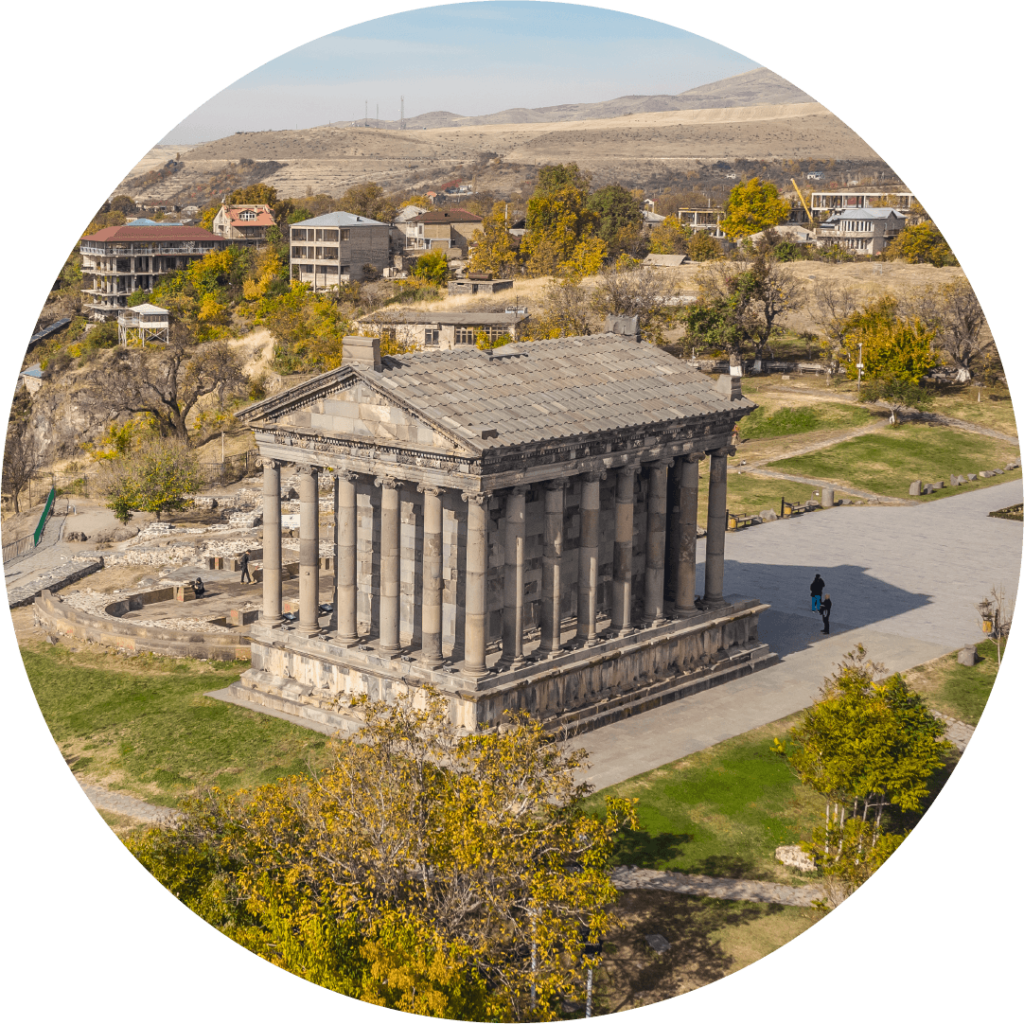 Arrival in Yerevan. Meet &amp; greet assistance at the airport and transfer to hotel for check in.
Overnight stay in Yerevan.

Breakfast at the hotel. Free day own leisure. Overnight stay in Yerevan.

Legend says that the first word Noah pronounced as he exited the ark was “Yerevats” – translated as “it can be seen”. This refers to the land he supposedly saw after the huge flood, which was later changed to “Yerevan”.

Yerevan is the capital of Armenia. Erebuni-Yerevan is one of the most ancient cities in the World. This year it celebrates its 2800 anniversary.

The city is situated in the northeast part of Ararat valley, on the height of 850m-1350m. Population is around 1 million.

It’s architect, Alexander Tamanyan, used the most progressive method of city building in 1923 – “planning of solar rays” into the foundation of the city plan. It is a walking city based on a circular foundation, consisting of parks, statues, museums, restaurants, cafes, fountains.

The tour will take you to Tsitsernakaberd, the memorial of Armenian Genocide. The memorial is visited by every single Armenian all over the entire universe to pay respect to their ancestors.

The next stop will be the Cascade or as we like to call it “The stairway to heaven”, one of the symbols of Armenian capital. This is a key structure in Yerevan city architecture constructed in the 80’s, which lately became another very popular focal point for local people with multiple cozy cafes, beer places and restaurants, as well as it is a very interesting sightseeing place for visitors. Today many new abstractive and contemporary art pieces are placed in the garden of Cascade. Concerts and traditional dance events are periodically held here to entertain the public.

Your final spot will be reached after climbing some 600 stairs up the Cascade to the viewing point of Yerevan city. Here an amazing view of the capital is opened to the audience completed by the gorgeous mount Ararat.

The tour will continue walking towards famous Opera House, Northern Avenue and end Republic Square where you may watch the dancing fountains show. (Summer time only).

Note: This product includes transfers from and to your hotel. The Yerevan dancing fountain show is only available during the summer months. 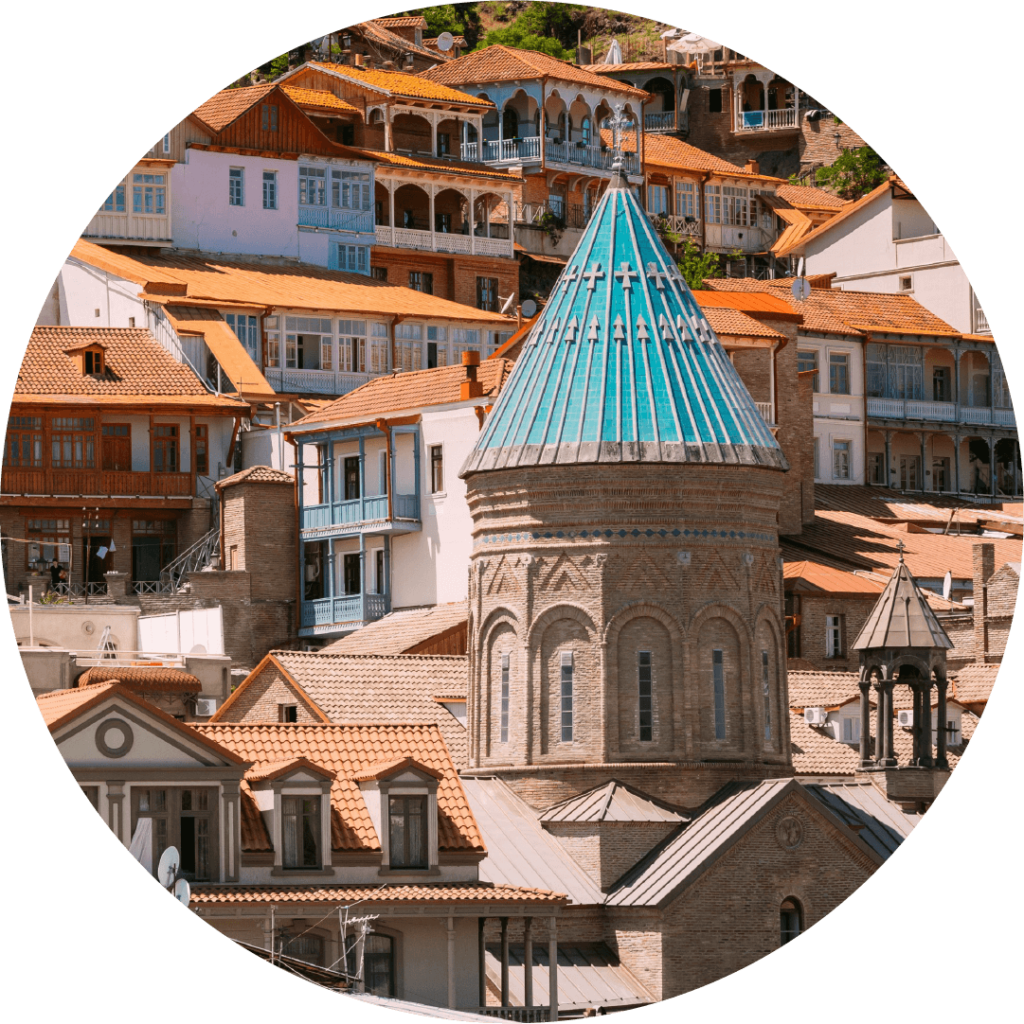 Arrival in Tbilisi, Meet & greet assistance at the airport and transfer to hotel for check in.

Best way to see Tbilisi with unique views from the second floor of our open top bus. Get a free Wi-Fi on board; don’t forget your free SIM card, headphones and Tbilisi map

Hop aboard a comfortable red bus and explore the beautiful city from your seat.

Breakfast at the hotel. Free day own leisure. Overnight stay in Tbilisi

3Star – Vista Hotel or any similar

Best way to see Tbilisi with unique views from the second floor of our open top bus. Get a free Wi-Fi on board; don’t forget your free SIM card, headphones and Tbilisi map

Hop aboard a comfortable red bus and explore the beautiful

City from your seat. Suspended between history and legend, myth and beauty. Tbilisi keeps untouched its infinite charm and its wonders. Bus tour around Tbilisi saves valuable time by combining Tbilisi top sights.

See Tbilisi highlights in an efficient, flexible way on a hop-on-off bus tour. Choose a 24- or 48-hour ticket to suit your schedule, and then step aboard at one of the 12 stops and enjoy unobstructed views from the open-top upper deck. Listen to the audio commentary with historical and cultural information about each sight as you pass. If you stay on board the entire time, the loop takes between 1.5 hours; otherwise, you can choose to get off at any of the stops and explore further on your own. Sights include the Sulfur baths, Peace Bridge and Fortress wall, Flea market among others.

Important Note: You need to board the trip from any of the points (City Tour Tbilisi Stops) which you find convenient. There is no transfer service to/from your hotel for this tour.

This Tour is available only from Tbilisi. 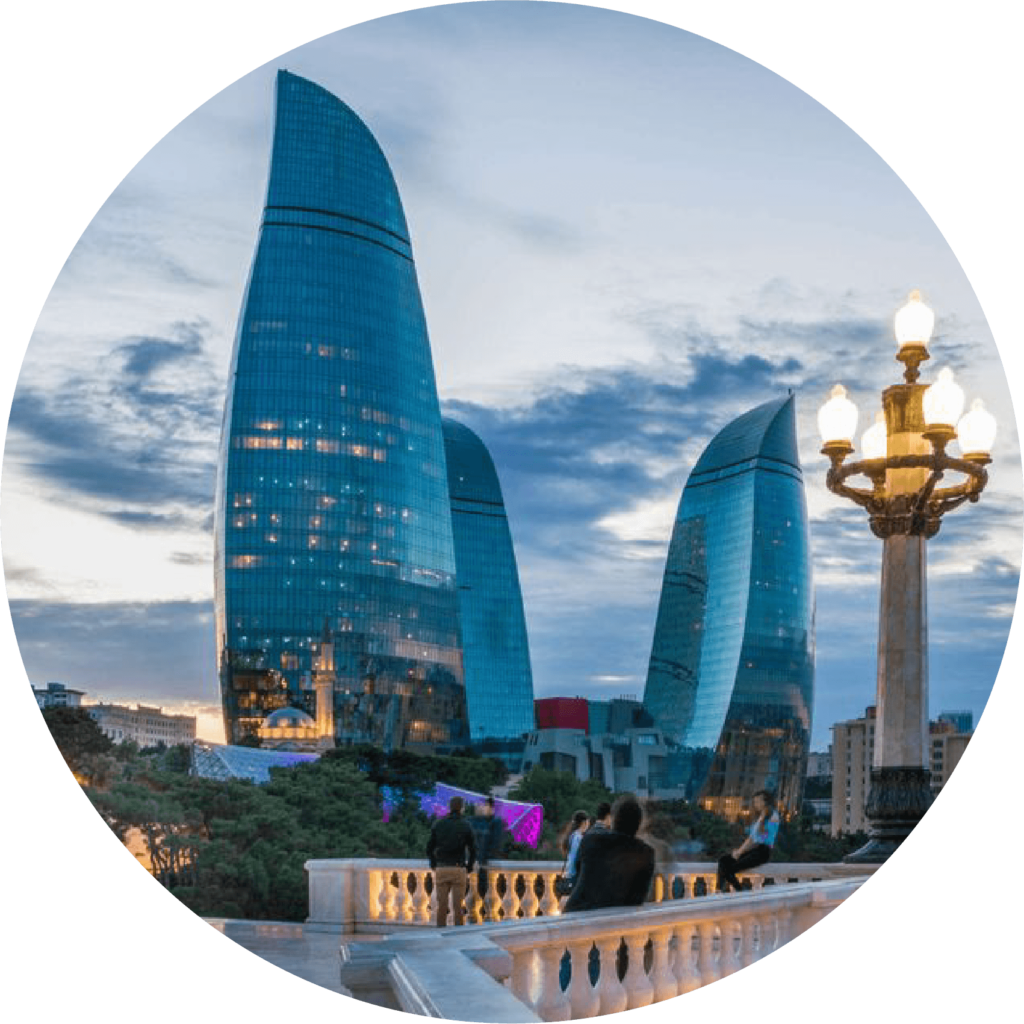 Arrival in Baku, Meet &amp; greet assistance at the airport and transfer to hotel for check in.
Overnight stay in Baku

Venture into the history and culture of Azerbaijan’s iconic capital city and explore all the ancient and modern marvels that Baku has to offer.

Breakfast at the hotel. Free day own leisure. Overnight stay in Baku

3Star – Consul Hotel or any similar

Your tour will start with visiting Heydar Aliyev Centre designed by world-famous architect Zaha Hadid and devoted to national leader Heydar Aliyev. It is vast and jaw-dropping majestic statement of fluid 21st-century architecture forming abstract waves and peaks that seem to melt together. The real delight is simply pondering and photographing the extraordinary exterior from ever-changing angles. Make a stop next to the popular “I love Baku” sign to take some pictures.

Want to have a close look at the Baku`s most popular landmark? Baku business and hotel complex Flame Towers Baku is composed of 3 buildings. The surface of the Towers is fully covered with LED screens reflecting different visual characters in motion, easily visible from the far corners of the city in the evening. Walk along the Alley of Martyrs which is usually being included in the protocol visits of the foreign officials. Enjoy the panoramic view of the city and its bay from Baku’s Highland Park (also called Upland Park), the highest point in the Azerbaijani capital. Walk down to Baku Boulevard to view the International Mugham Center created in order to widely promote Azerbaijani ‘mugham’ (folk musical composition) in the world and shaped as the national musical instrument – ‘tar’. Here you will also see Azerbaijan National Carpet Museum, designed by Austrian architect Franz Janz and looking like a rolled carpet.

Wander between the decorative stone bridges of so-called Little Venice, a small town on the water and one of the jewels of Baku. It has two large and several small islands and its gondolas are travelling in the channels full of still and clean water.

Cross the street and enter Icherisheher (Inner City), known as a “Fortress” or “Old City”, a unique historical and architectural conservation area in the center of Baku. This is one of the most ancient places of the country where archaeological excavations revealed burial vaults of the Bronze Age. Maiden Tower (12th century) and The Palace of Shirvanshahs (13th-16th centuries) are the best known historical monuments located in the Old City. Besides, there are a lot of other unique monuments such as mosques, minarets, the remnants of caravanserais “Multani” and “Bukhara”, ancient baths, etc. Stroll down the paved streets of this ancient city and drop to some of the numerous souvenir shops where you can buy national clothes, kerchiefs, scarves and caps, dishes and handmade carpets.

After leaving Old City move to the modern downtown, straight to the Fountain Square, the most popular public place with many restaurants and shops, main location for public festivals, shows and celebrations and pedestrian Nizami street, old trading zone with lots of shops and boutiques. 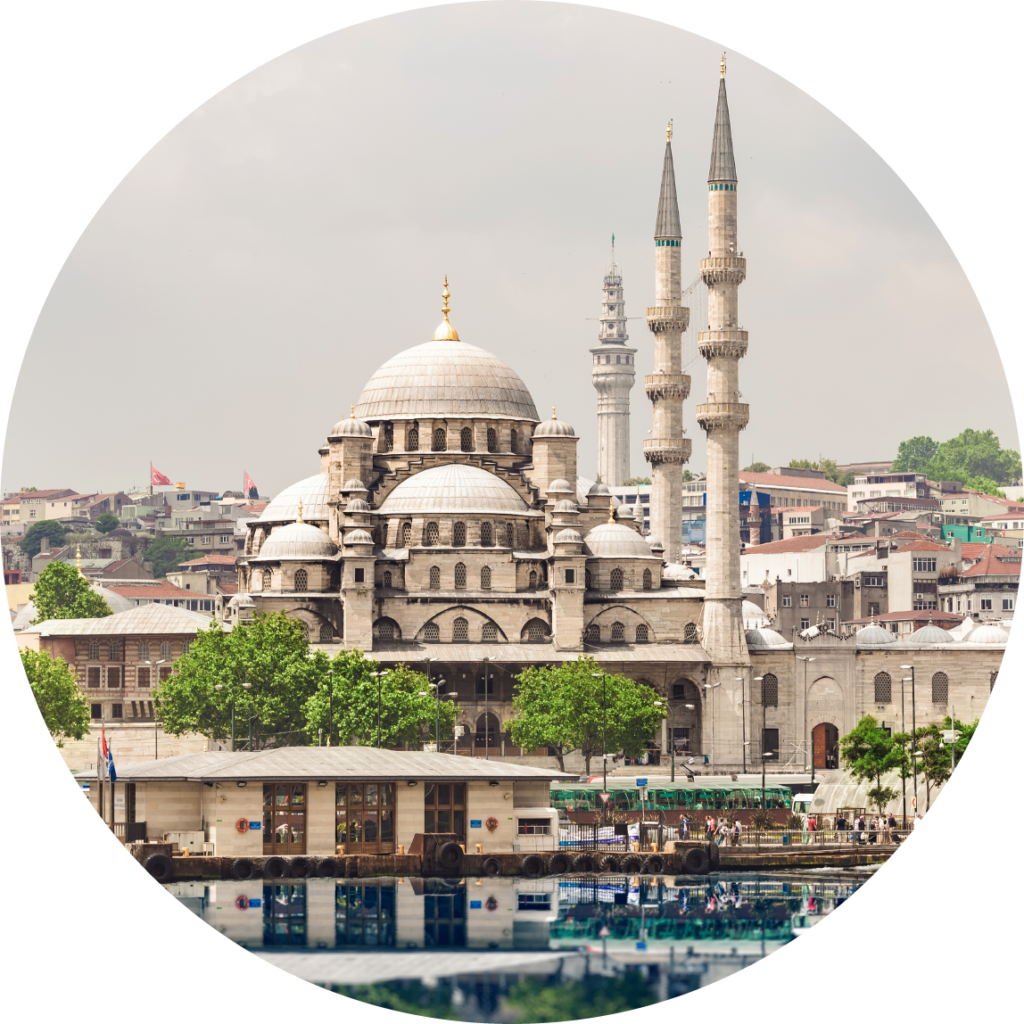 Arrival in Istanbul. Meet & greet assistance at the airport and transfer to hotel for check in.

The busy streets of this modern-day metropolis are still immensely rich in heritage, with the majestic Blue Mosque, Topkapi Palace and Hagia Sophia capturing the sights in this city that bridges Europe and Asia.

Breakfast at the hotel. Free day own leisure. Overnight stay in Istanbul. 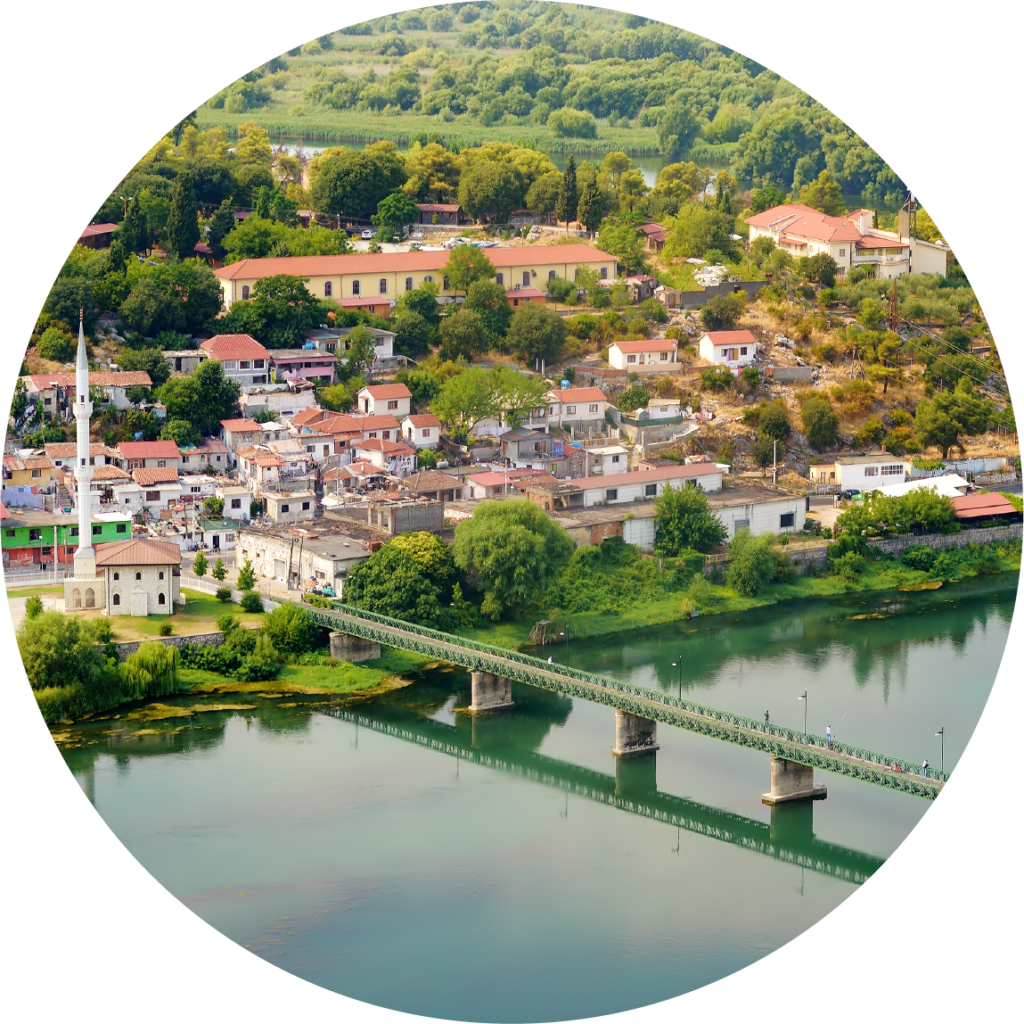 Arrival in Tirana. Meet & greet assistance at the airport and transfer to hotel for check in.

Breakfast at the hotel. Walking Tour of Tirana.

Breakfast at the hotel. Free day own leisure. Overnight stay in Tirana.

Breakfast at hotel. You will be met by the guide at the lobby at 10.00 for a Walking Tour of Tirana. The tour explores the historic and architectural evolution of Tirana, which features a dynamic and rich history as it moved from a small rural and trade center in the 17th century into the main capital of Albania, the cultural hub with traces of ancient ruins, Ottoman, Italian, communist and modern buildings and traditions.

The walking tour includes the new promenade, approaching the Byzantine ruins and walls, reaching the main Italian boulevard, with the view of the Art Gallery and the distinguished Italian buildings, Tirana City Hall, Statue of Skanderbeg, Ethem Bey Mosque, Skanderbeg statue, Clock Tower, National Library and Opera House . The tour concludes by 1230 or within two and half hours. Overnight at hotel. 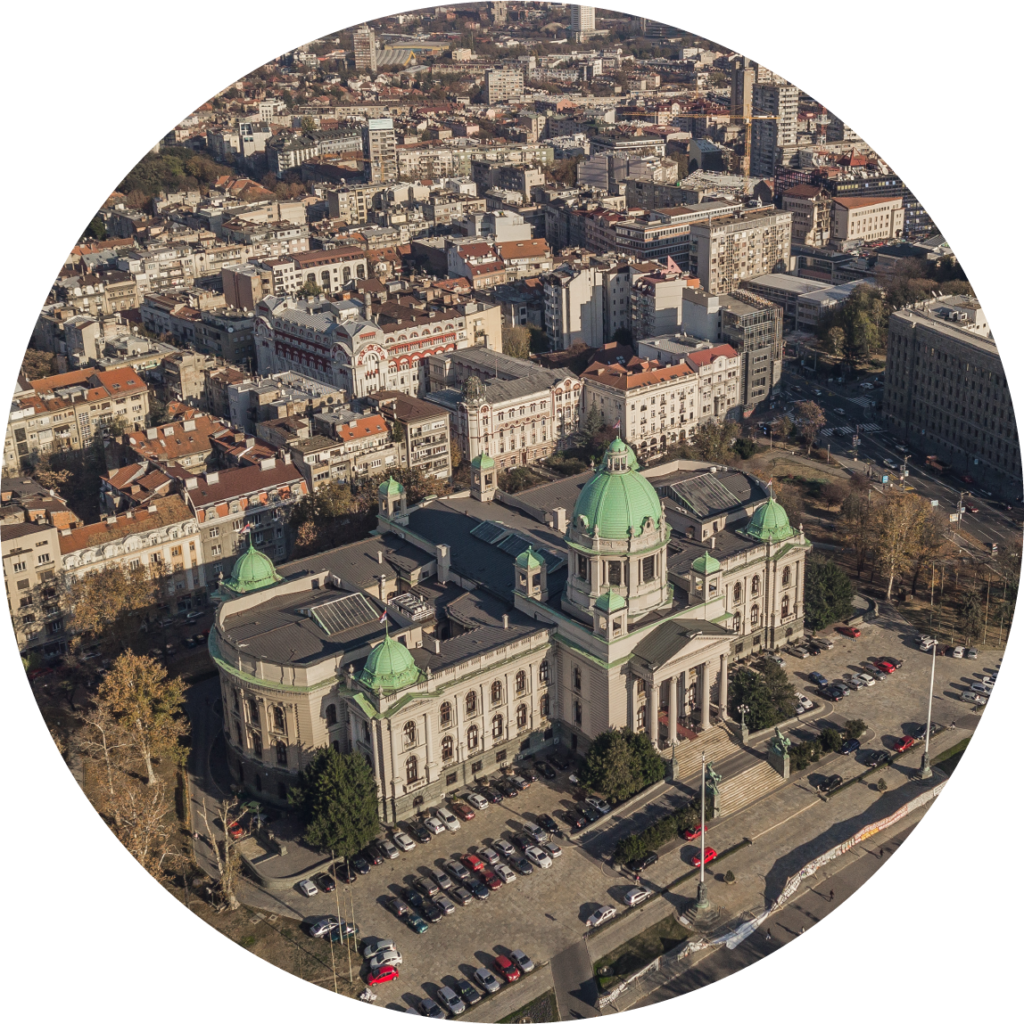 Arrival in Belgrade. Meet & greet assistance at the airport and transfer to hotel for check in.

The tour of the most important historical sights and attractions of Belgrade, including areas beyond the city center.

Breakfast at the hotel. Free day own leisure. Overnight stay in Belgrade.

The tour of the most important historical sights and attractions of Belgrade, including areas beyond the city center. Our journey begins from the most important place: between The National Assembly from one, and The City Assembly from the other side, and then we will pass through one of the main streets of Belgrade, named Kneza Miloša, with beautiful architectural style from 20th century. Driving through the luxury area of the city – Dedinje, you will see The House of Flowers (Mausoleum of the most famous president in Ex Yugoslavia, Tito), then we will pass by the Royal Compound, and the most luxury street with residence of many embassies. Then we go to the fascinating biggest orthodox temple in Europe named Temple of St. Sava (visit of the temple). After the visit, we continue with the vehicle to the Old town, Belgrade fortress and Kalemegdan park, where you will enjoy your walking tour in this area.

Note: Pick-up from Hotel in Belgrade.

How to make a Booking?